On Friday, Digiday wrote a piece examining some assumptions that are all too often made about the way people read on the internet. It covered a bunch of our favorite stuff including that the conventionally “good” advertising spots aren’t necessarily in the places people read. In addition, Lucia introduced something we’ve been thinking about a lot lately: the duration of an impression.

Over the past year, the industry has finally rallied around a viewability metric. As a result we’ve seen a lot of premium publishers do great work to make their ads more viewable and – in turn – pull way ahead of their lower quality competitors. Naturally now, more and more ads are becoming viewable across the internet. Which begs a new question we hear almost daily from publishers: how do I prove that my inventory is actually better than the alternative?

Everyone is looking to sell based on reader attention, but I’ve yet to meet someone who thinks that the viewable impression actually helps them do that — particularly when it comes to premium sites.

So we’ve been working with publishers, helping them take the next step: understanding how long people are actively focused on content while an ad is on the screen.

There’s a lot of research out there that says the more time people spend with an ad, the more likely that ad is to succeed, but this research rarely looks at how long real ads on the internet perform.

We decided to find out.

We took a look across a select group of publishers to find out how long ads are seen when they’re seen. 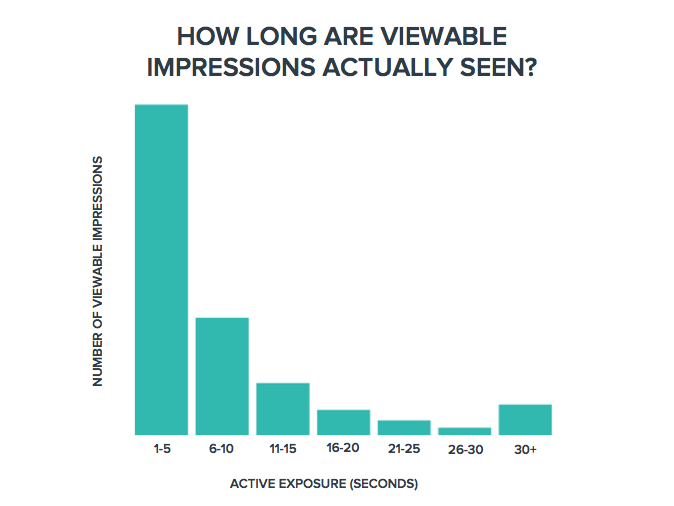 Turns out, half of all viewable ads are seen for 1-5 seconds while the other half are, obviously, seen for longer than that. The natural reaction is to look at each number of seconds and sort of consider them “engagement points” and just assume that a higher number means better ads, but it’s actually not that black and white.

Research has shown over and over that at about ten seconds of exposure diminishing returns start to set in and each additional second is worth less in terms of recall than the previous ones; that doesn’t mean, however, that every ad should seek to be seen for ten seconds. It means that different ads are right for different goals.

If an advertiser is trying to get their name out there as efficiently as possible in a pure awareness play, they likely want to be buying a spot where shorter impression duration occurs. Whereas if an advertiser is trying to get a specific message out there or telling a more complex story than just their logo appearing in an ad, they should look for one in the 6-15 second range.

This, of course, leaves a big chunk of impressions that are longer than that ideal engagement time and don’t really help advertisers any more than 15 seconds ones. We’re working with a handful of people to see what kind of creative things they can do to solve that, getting the most of their inventory and giving their audience fresh content that benefits everyone involved — the publisher’s business, the brand’s goals, the reader’s interest.

The point is, not every viewable impression is equal but that doesn’t mean that the shorter ones are categorically worse. It means that we should think about the goals of a campaign and which impressions are the right way to achieve these goals.

(Charting the News) with The Economist

The Economist just charted 2017 using Chartbeat content-level data. How did Trump compare to world elections, Las Vegas, Irma, Weinstein and Markle? What were the events that most grabbed the…

Today Chartbeat evolves its brand and product experience to match the evolution, passion and dedication of you – our customers. We are inspired by the courage and work ethic you…